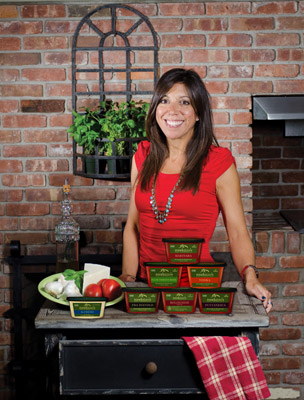 FROM FAMILY RECIPE TO SUPERMARKET SHELF:

For Rochelle Randazzo, founder of Randazzo’s Honest to Goodness Sauces, the passion for cooking began when she moved away from home and started recreating her mother’s family dishes.  Born and raised on Long Island, she grew up in an old-fashioned Italian-American household where matters were settled at the dinner table surrounded by family and simple, delicious meals.  Those family recipes became Randazzo’s Honest to Goodness Sauces, modernized with fresh, local ingredients, and the desire to create ready-made sauces without the preservatives, added sugar, or sodium levels of other brands.

After graduating from Hofstra University, Randazzo enjoyed a successful career in Sports and Entertainment, including a stint with the NY Yankees, before moving to New Jersey and starting a family.  Randazzo knew she would re-enter the professional world some day, but in the meantime she began tweaking those family recipes, simplifying them and using local produce to make them spectacular.  “One of my son’s has a tree nut allergy,” explains Randazzo. “Any mother of a child with a food allergy knows that you spend a lot of time looking at labels to make sure that what you are giving them is actually good for them. The recipes I was creating were first for my family.”

When she started passing out samples to her friends and neighbors, the feedback was overwhelmingly positive, and a Sauce Club was born.  After just three tasting parties, Randazzo’s Sauce Club had 60 members who received an average of three sauces per month delivered right to their doorstep.

“I did not want to be just another sauce-making company,” recalls Randazzo.  “I wanted to provide great tasting pasta sauces in a responsible way, using only natural ingredients that can be found in anyone’s garden, pantry or refrigerator.” That philosophy, along with a tasty repertoire of sauces, gave Randazzo the confidence to try out her sauces on the retail world under a new brand name, Randazzo’s Honest to Goodness Sauces.

Today the sauces are still cooked in small batches to preserve the integrity of the original recipes, still utilizing the best ingredients. The line has also grown from the five sauces that she shared with neighbors to the full line that includes: Vodka, Plum Tomato Basil, Puttanesca, Alfredo, Fra Diavolo, Marinara, Bolognese, Tomato Cream Sauce with Chicken Sausage and a new line of Pesto Sauces: Basil, Spinach, Kale and Five Herb.

“The Pesto Sauces are really a labor of love,” says Randazzo. “With an allergy-conscious house, I worked to find a substitution for the pignoli nuts that are a staple of good pesto.  I found that pumpkin seeds added the salty nuttiness that I was looking for and that my son can eat.  It’s actually become one of his favorites.”

Randazzo’s Honest to Goodness Sauces are now sold nationally under the private label of a major national natural foods market and under the Randazzo’s Honest to Goodness label in the deli/specialty section in select stores in the Northeast and of course, you can always find them on the table at the Randazzo’s house where they are still settling things the old-fashioned way – at the dinner table.